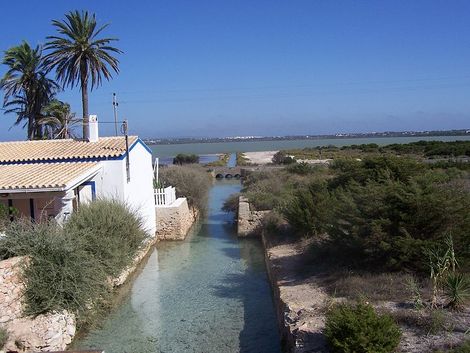 Formentera is one of Spain’s lesser known Balearic islands. Just an hour away by boat from Ibiza, and only 19 kilometers in length, Formentera is a wonderful place for a relaxed but interesting holiday. The island is made up of just five main places — Sant Francesc Xavier, Sant Ferrin de Ses Roques, El Pilar de la Mola, Sa Savina and Es Pujols — and has beautiful beaches, a mild climate and a number of interesting historical places. In fact, for such a small place, there’s still plenty to keep you busy and these five are some of the top things to see or do.

Nude Sunbathe – Before anything else, Formentera is known throughout Europe as one of the best places on the continent to nude sunbathe. Not only are the beaches absolutely gorgeous, but sunbathing in the nude is legal on most of them. Don’t be surprised, if you do decide to bare all, if you’re around a large number of other people doing just the same thing. After all, mild climate, great beaches and no-one trying to arrest you. What’s not to like.

San Francisc Xavier – The island’s small capital city, San Francisc Xavier is a picturesque town surrounding an old church. A lovely little place of whitewashed houses, small restaurants and cafes, it’s also a wonderful place to shop if you love arts and crafts. It even has the ocean on one side and two lakes on the other — not something you see every day.

Ca Na Costa – One of the oldest things to be found on Formentera yet, Ca Na Costa is a megalithic stone circle archaeologists believed to house a large burial chamber. Built around 2,000 years BC, human remains and several artifacts were discovered when it was first excavated.You’ll find Ca Na Costa at the north end of Formentera,

Take a Cycling Tour of Formentera – Although cars are allowed on the island, the use of them is discouraged, as residents don’t like the accompanying pollution. That’s why most of the residents cycle from one place to another. It’s also why you can hire a bike and cycle from one end of the island to the other and see it in all its stunning natural glory and not through the window of a motor vehicle.

Bike and safe ‘green lanes’ circle the island, and there are 19 ‘Green Routes’ mapped out, so you can officially start at one place and end at another without getting lost. A couple even follow old Roman roads. Pick up a pamphlet with all of the 19 routes mapped out at Tourist Office.

Go Arts and Crafts Shopping – You’ll find small arts, crafts and specialty food stores all over the island and they sell the real deal and not the usual tourist junk. There’s also a weekly arts and crafts market in the small town of El Pilar, where you can purchase beautiful jewelry, pottery, lacework and, of course, try some of Formentera’s delicious traditional food.