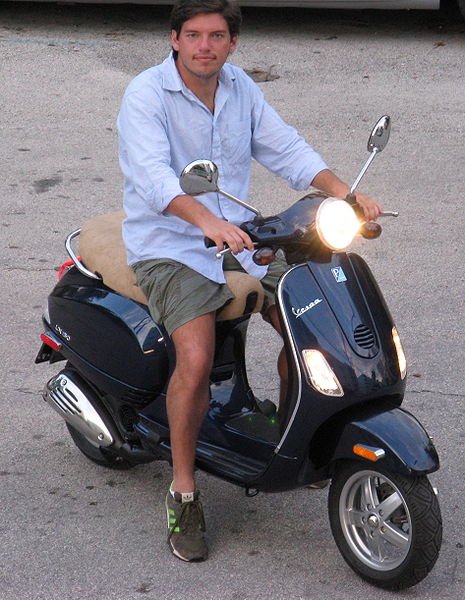 Driving around the Altea, Albir, Polop and La Nucia area of the Costa Blanca in Spain, I’ve been noticing a ton of motorbikes and Vespa scooters. Riding along in groups of four, five, six and more, these BMW motorbikes and Vespas are ridden by people who seem to be having the time of their lives.

Back at our hotel in Albir, I enquired about the groups of bikers and was told they were from one of a couple of companies offering tours of La Nucia, Altea, Albir, and Polop.

Called ‘Vespa Tours’ and ‘BMW Tours’, you get to take a four to five hour tour of the Costa Blanca, on the back of a bike, safely kitted-, with an instructor and for a surprisingly inexpensive price.

How Much are Vespa Tours and BMW Tours? – One of the best tour deals on the Costa Blanca, taking a tour of Altea, Albir, La Nucia, Polop and Callosa takes around five hours and is surprisingly cheap.

The Vespa Tours start at around €59 ($80) for the driver and another €39 ($53) for any passenger, which for a tour that lasts for four hours and includes the use of a motorbike helmet is actually very cheap.

BMW Tours are more expensive, of course, but still a reasonable price when you consider what you get and how far you’re able to go. For only €129 ($174) for the rider and €39 ($53) for the passenger, you get five hours on a BMW G 650 and motorbike helmets.

With both tours, you can also hire jackets, gloves and boots if you’re not kitted out properly or just like to really look the part. Bikes are also risk insured.

Where Do The Vespa and BMW Tours Go? – If you’re in Benidorm or Albir, the main tour company, La Marina Motor Tours, will pick you up at your hotel and take you to the starting off points for both the Vespa and BMW tours.

The Vespa Tour – Starting off at La Nucia, the Vespa Tour will take you to the beautiful town of Altea, the more modern town of Albir, and the gorgeous village of Polop up in the mountains. You’ll ride along country roads, ocean side highways and so far up into the mountains around Benidorm, you’ll feel your ears pop coming down. You’ll spend two hours on the bike and the other two hours seeing some of the famous sights around Altea, Albir and Polop.

Lunch, of traditional Spanish paella (a rice dish with sea food – delicious), in an ocean side restaurant is included in the price. Just don’t expect a beer, as driving with any alcohol in your body is not allowed.

The BMW Tour – This tour is for an hour longer and also begins in La Nucia. From here, you’ll drive along the roads of La Marina (not much traffic and a great surface to ride on), where you’ll stop off to see museums, caves and have lunch at a traditional Spanish restaurant in the mountains. You’ll also see some of the Costa Blanca’s most beautiful views.

What You Need to Know for Safety – Companies are fully insured and Vespas and BMW motorbikes are thoroughly serviced and well taken care of. You’ll also be with an instructor during your entire tour, with every step of the way being guided, so there’s less chance of any accidents. Speeds too will be monitored, with no zipping off at more than 50 miles over the speed limit (Spanish police are strict).

For the Vespa tour, you must be at least 25 years old and your passenger no younger than 12. You must have a “Type B” drivers license, must have ridden a scooter before, and before you set off be prepared for a breathalyzer test (no drunks accepted here). Also bring your passport and credit card.

For the BMW tour, the minimum age for the driver is 30 years old, with a passenger no younger than 12. Your license must be a “Type A”, you must have ridden a motorbike before and, again, you will need your passport and credit card. Payment for both courses, of course, is up front before you set off.

For both tours, wear jeans and don’t forget your sunglasses. The sun on the Costa Blanca can be very strong and you need to be able to see where you’re driving.

Don’t forget – drive safely, listen to and do everything the instructor tells you to, and don’t be a jackass and try to ride faster than is allowed. The roads on the Costa Blanca are superb, the scenery is stunning and the experience fun – in fact, you’ll have a blast.

Photo copyright – Vespa by Craurell/Creative Commons – the gorgeous guy does not come with the Vespa tour!