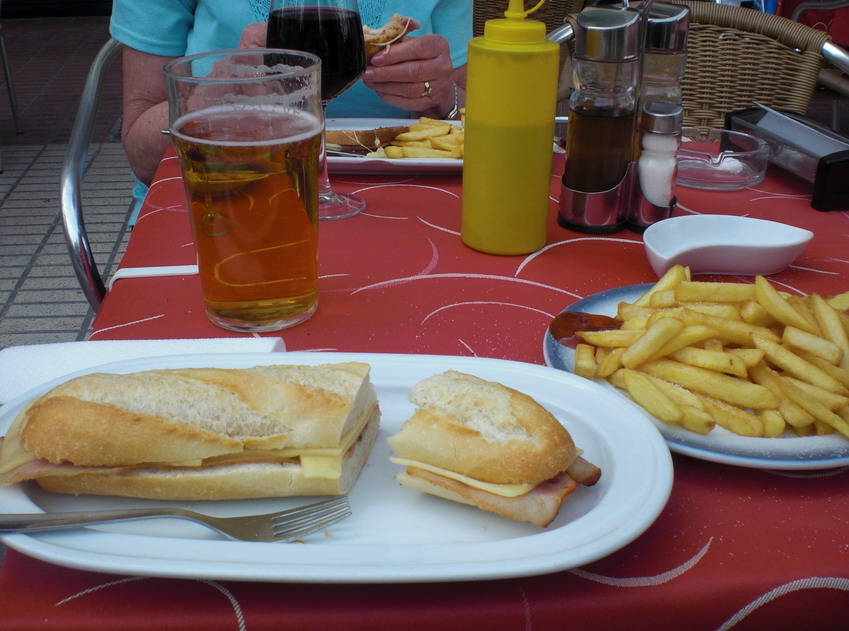 What drew our eyes were the hordes of Spaniards eating there which, as I’ve learned over the years, if the locals eat there it’s usually good. After sitting on Center Plaza’s beautiful patio and eating a delicious meal it was easy to see why – superb food, an inexpensive price and a gorgeous location.

Where is Center Plaza in Benidorm? – Just one block back from Benidorm’s popular beach and promenade, Central Plaza is situated on a pretty square, overlooking a small park.

If you walk down Avenue de Mediterraneo coming from the Rincon area of Benidorm, it almost dead ends into Plaza Hispanidad, where you’ll see three large cafes on a huge patio. Center Plaza is the first cafe on the right.

The Atmosphere of Center Plaza – We chose Center Plaza, as the day was so beautiful we were looking for an outdoor cafe. Center Plaza has an enormous patio directly outside the front of the cafe, with two other restaurants’ patios right next to it.

The park in front of these patios blocks you from much of the street and the traffic, so you’re eating in a pretty place but still surrounded by other diners – a true outdoor Spanish experience. It’s casual, it’s relaxed, and it is typically Spanish. Exactly the type of place I love when I’m vacationing in Spain.

Our waiter at Center Plaza was lovely. He spoke excellent English, joked the whole way through our meal, and was attentive but not constantly hovering over our shoulders. The food arrived quickly, and a second order of drinks was taken and had quietly appeared on our table without us hardly realizing it.

In fact, if you are looking for friendly service, Center Plaza Cafeteria and Bar in Benidorm is perfect. 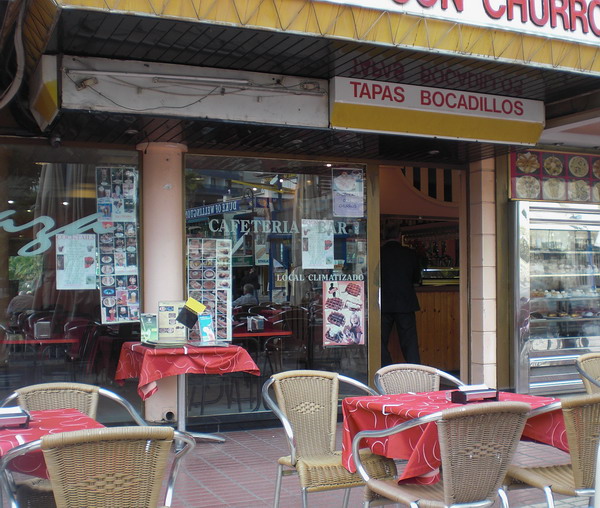 The Food at Center Plaza – Center Plaza has a large menu with a wonderful selection of dishes. Starting with various types of Spanish salad, the cafe has a huge choice of bocadillas (Spanish sandwiches on baguette bread), sandwiches, burgers and fries, bacon, egg and chips, spaghetti and pastas, pizzas, various British-style dishes and a large menu of desserts and cakes.

My father and I ordered two large bacon and cheese bocadillas and an order of French fries to share. My mother had a toasted ham and cheese sandwich that came with fries. For drinks, we decided on two large Spanish beers and my mother drank a glass of red wine. My mother and I ended the meal with two cafe con leches (Spanish style lattes).

The entire meal for three people, including alcohol, was only 26 euros ($36.40). Inexpensive for such a large quantity of food and alcohol and, yes, it was delicious. Perfect French fries, baguettes stuffed with cheese and bacon, good Spanish beer and large cafe con leches with lashings of milk.