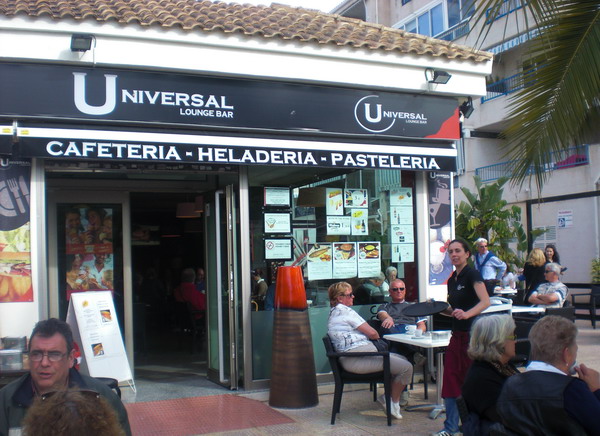 On a recent trip to Albir, Spain, we spent a lot of time in sidewalk cafes. Part of the Spanish culture, enjoying a coffee and a bocadilla (baguette sandwich) at a cafe at least once a day is done by most of the population, including Albir’s vast number of tourists.

One particularly popular cafe is Universal Lounge Bar situated in the center of town. Universal Lounge Bar, unlike its name suggests, really isn’t much of a bar or a lounge, but is more of a trendy cafe and restaurant incredibly popular with Norwegian and British tourists and expats from a variety of countries. 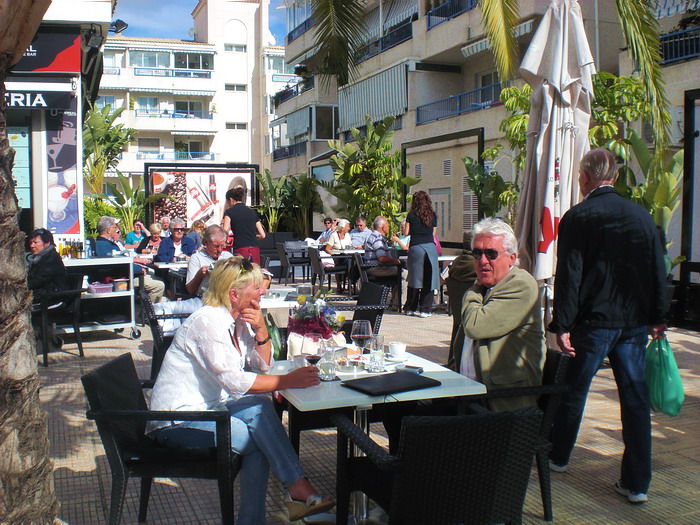 What’s So Special About Universal Lounge Bar? – When we first arrived in Albir, we were fascinated by how permanently packed Universal Lounge Bar was. From when it opened early every morning until it closed around 8:30pm, the cafe was jammed with Norwegian expats and British tourists, all vying for one of the tables out on the large outdoor patio.

By the time our second week in Albir arrived, we decided we must stop off at the cafe to check out this phenomena and see for ourselves why.

We chose a weekday morning to first try out Universal Lounge Bar as on Sundays, when Albir’s new market was open, there wasn’t a chance of getting a patio table at all. So, on Tuesday morning while walking by, we saw a vacant table and took our chance.

Opening the menu, we were confronted with a huge choice of drinks, snacks and meals. The coffee menu itself included about 15 different varieties of coffee. On top of that, if we were eating, we had a choice of sandwiches, salads, spaghetti, omelette dishes, Spanish cuisine, Norwegian cuisine and a few bits of British fare thrown in as well.

Prices were incredibly cheap, for what looked like large helpings of food, making it already obvious why Universal Lounge Bar was such a winner.

Our waitress arrived quickly, the order was taken and three cafe con leches and a slice of apple pie, piled up with cream, was delivered to our table in about three minutes. 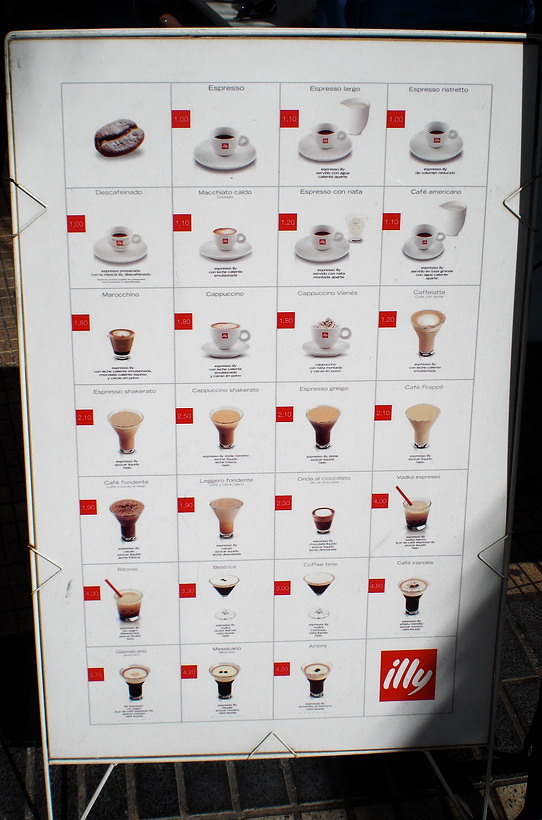 The cafe con leches (made with illy coffee) were the best we had tasted anywhere in Albir. Strong, but not too strong, and served in trendy illy cups, we went ahead and ordered three more immediately. They really were that good.

My apple pie was excellent (the second best I had eaten on my trip to Albir) and, from just that tasting, I had already decided I would be eating here again before our vacation was over.

Prices at Universal Lounge Bar – Although quite an inexpensive town already, with many cafes offering cheap deals on cafe con leches and cake, Universal Lounge Bar turned out to be the cheapest cafe we ate at our entire vacation. Coffees were only 1 euro 30 cents ($1.72) and, with a special for coffee and apple pie at only 3 euros 50 cents ($4.70), my order was a great deal too.

With prices like this, it was easy to see why Universal Lounge Bar was crowded every single day. Obviously by folks who loved the cool atmosphere, comfortable patio and superb food and drink for dirt cheap prices.

If you would like to check out Universal Lounge Bar in Albir, Spain, you will find them on the internet here and don’t forget to look at their enormous menu online, as well as some cute photos of the cafe.