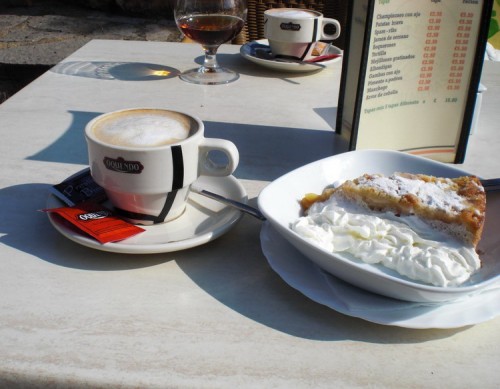 On a recent trip to Altea, Spain, on a morning walk on the beautiful miles-long promenade, we stumbled across a trendy Euro-style cafe called Brasserie Zero Zero Beach. Packed with European tourists and locals, we realized immediately it must be something quite special as few other cafes in the area had that many customers.

You’ll notice Brasserie Zero Zero Beach from its decidedly European design and it’s large patio packed with people. There’s also a chalkboard on the promenade across the small road from the cafe, so make sure you read up on their daily specials before you take a table.

So, we ordered cafe con leches (the Spanish version of a latte), three brandies and a cake. The coffees were Spanish-strong and hit the spot (they also come with a small ginger cookie), and the brandies were only the same price as other cafes in the town of Altea – a little surprising as so many ocean front cafes in Altea and Albir charge more purely for their pretty locations.

The apple pie was good enough that a second slice would have also hit the spot, if my already overloaded stomach could have handled it.

The second time we frequented Brasserie Zero Zero Beach, we decided to eat lunch there. We needed a break from our all-you-can-eat hotel buffet and the menu we’d looked at the visit before had been quite inviting.

Brasserie Zero Zero Beach offers a good mix of sandwiches, burgers, salads, fish dishes, cakes, desserts and ice cream. They also serve a full cooked breakfast that, if I hadn’t already eaten one I would have tried as it looked amazing.

We ended up with three burgers (mine with cheese), salads, two Spanish lagers and a bacardi and coke. The burgers were cooked to perfection (mine was perfectly ‘well done’, just as I like it) and the salads had a tasty dressing. To round out the meal, we also had three more cafe con leches, as we’d enjoyed them so much the time before.

That sometimes sterotypical Euro-style arrogance seems to be de rigeur which, as I’m European myself, I have no problem emulating I just don’t as I find it rude, and it does slightly spoil your enjoyment of the cafe.

We did however have one waiter who was delightfully friendly so we ended up laughing at the others, who really had nothing to be so delighted with themselves about.

You’ll find Brasserie Zero Zero Beach on the paved promenade in between Albir itself and the main built up area of Altea. It’s just three blocks down from the Hotel Kaktus Albir. They open every morning at 10am.