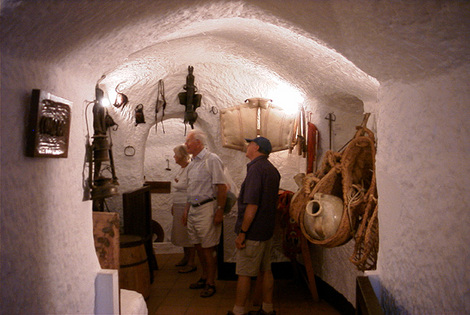 If you’ll be visiting the southern province of Almeria take a tour to Guadix. Guadix is a relatively small city inland from Almeria city, and is famous for its cave houses. These cave houses are up in the hills and are in, what they call, the Troglodyte Quarter (Barrio Troglodyte) of the city. Hundreds of people still live in these cave houses and British and American tourists have even bought them as holiday homes.

The cave houses have been built in Guadix for over a thousand years. They were hollowed out of the rock and then a wall would be built at the front of the cave to enclose it. The wall would have a door and several windows.

This part of Spain is hot during the day but can get cooler at night. The cave houses were perfect for this climate as they kept cool during the day, but were warm at night. They were popular for hundreds of years until the 20th century, when many people decided to move out to more modern houses. 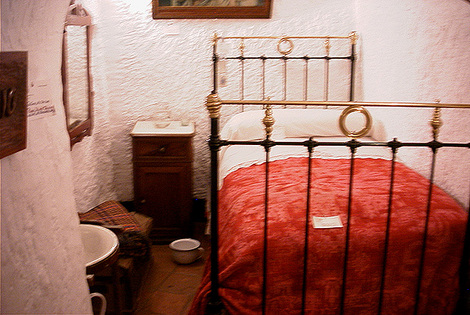 However, as the tourist industry started to grow in this region of Spain, Guadix’ cave houses became popular again as they were a great way to make some extra money. Some of the people who own them have opened them up to make small hostels. Others accept donations after they have let you tour their house.

Most of these cave houses however are not what you would expect. Their owners are not living back in the Stone Age, carrying water and making fires from branches they collect in the woods. Instead, the Guadix cave houses have most of the modern conveniences of any 21st century house. You’ll see ones with marble floors, fully fitted kitchens and bathrooms, cable TV and internet. Some of them even have 4 or 5 bedrooms, so a couple of rooms can be rented out to visiting tourists.

One of the ones we toured was owned by an old lady who had lived there for many years. She had had her cave house updated several years before and it was lovely. Immaculately clean, it had a cozy living room with TV, two tiny bedrooms, a modern bathroom complete with shower, a beautiful fitted kitchen with microwave and two sinks, and even two tiny closets hollowed into the rock to store things.

The walls of the cave were all whitewashed and the floors tiled with red terracota tile – just lovely.The temperature was perfect inside, around 70 degrees and the woman told us it stayed around this temperature throughout the day and night. She also said she loved living there as she slept so well. The caves are quiet inside, so no noisy neighbors, and the atmosphere is so calm and peaceful. 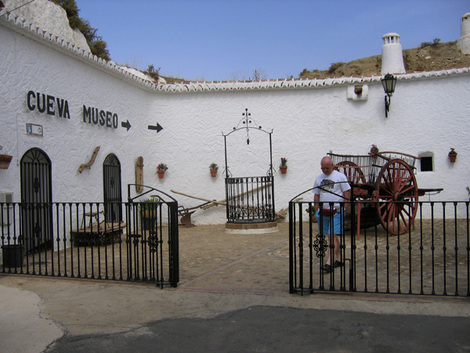 You can also see the Cave Museum (Cueva Museo), which is built in a cave. This is a large structure with some interesting exhibits about the history of caves. There are several little rooms set up as they would have been a hundred years ago – a perfect bedroom with a brass bedstead and even a pot to go under the bed for when you were ‘taken short’ in the middle of the night. There are even displays of old bridles, cooking implements, pots, hand-carved furniture and a room that showed how they dug out the caves.

The cave houses at Guadix are fascinating. There are several tours available in the area, but you can rent a car and drive to the Barrio Troglodyte where you can walk around yourself. You’ll find many people will ask you into their homes and show you around as they are proud of their cave houses and rightfully so.

You can also purchase one of these cave houses as several go up on the market every year. They would be a great place for a retirement home (no expenses for air conditioning) or a holiday home, or even as a rental property.