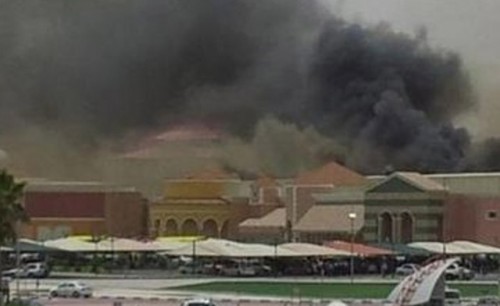 Tragedy struck in Doha, Qatar on Monday when a fire at a popular mall killed 19 people, 13 of them children. Four Spanish children whose parents were expats working in Doha for Spanish companies were among the dead. The children died in a nursery or creche at the mall, left there playing while their parents went shopping. As of now, investigators are already asking questions about why the nursery staff didn’t get the children out and why firemen had to rescue some children by cutting a hole in the mall roof after the staircase collapsed.

According to one witness, this is the third fire at the Villaggio Mall since the mall opened in 2006. 17 other people were also injured in the blaze. Among the dead were two firefighters and four teachers. Some people watching the blaze from outside the mall said firefighters were not at first aware it was the nursery that was on fire but, when that was realized, two firefighters rushed inside to try to get the children out. They were the two who died.

Witnesses also reported a fire alarm that sounded no louder than an alarm clock, so shoppers in the mall ignored it, and no sprinklers anywhere in the mall. There also seemed to be no evacuation plan as, even while the alarm was going off, shoppers were still shopping and the food court was packed with people eating. Nobody from the mall made an announcement telling people to leave, with some shoppers saying it was other shoppers at the mall who started the evacuation when they began to run through telling people there was a huge fire and they had to get out.

The Spanish children who were killed in the fire are from the same family — three boys and a girl, and were the children of a second marriage. All were thought to be under the age of five.