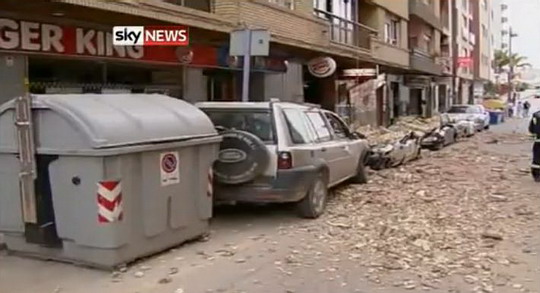 When you think of Spain you don’t think about earthquakes, but Spain does get them. Yesterday though, the region of Murcia in Spain was hit with a 5.1 earthquake, one of the worst in living memory and one in which at least eight people were killed. Authorities say it was the worst earthquake in Spain since the 1950s. The death toll was originally reported at 10, but then reduced to eight by local authorities.

The earthquake hit at 6:47pm, and was felt as far away as Madrid. Around 10,000 people were evacuated from the Lorca city center after old and new buildings were damaged.  Scores of injured were taken to the city’s hospitals. Three of the dead were a pregnant woman and two children.

The 5.2 earthquake was actually one of two quakes. The first, a magnitude 4.4 hit two hours earlier, but the major damage and deaths came with the 5.2 earthquake. Luckily, the main quake hit during siesta time which meant injuries and deaths were likely less than would have been at another time of day.