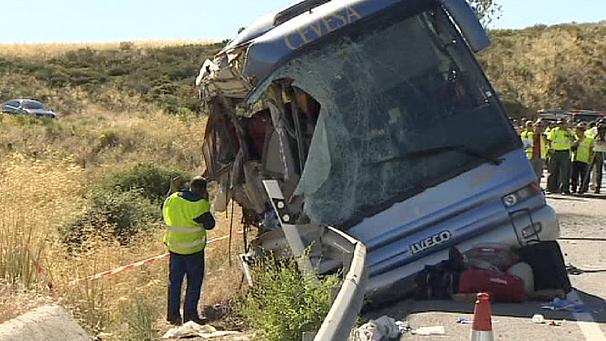 According to El Pais, nine people were killed in a bus crash near Avila, Spain on Monday morning and five others were seriously injured.

The bus, which was carrying 30 passengers and the driver, crashed at 8:45 am on the N-403 highway close to the town of Tornadizos. The driver is said to have tested negative for alcohol.

Passengers said the driver was a substitute driver as the regular driver was on holiday, and had lost control of the the bus on a bend causing the bus to partially overturn.The bus was a commuter bus for a company called Cevesa and all passengers are said to be locals.

Nine people died instantly, or within minutes of the crash. Paramedic crews had to cut several other people from the wreckage. Fifteen people, including a young girl, were taken to area hospitals with injuries, five of them serious.

The driver is said to be uninjured but extremely upset over the accident.

You can find out more about the Avila bus crash in the Euro News video below.