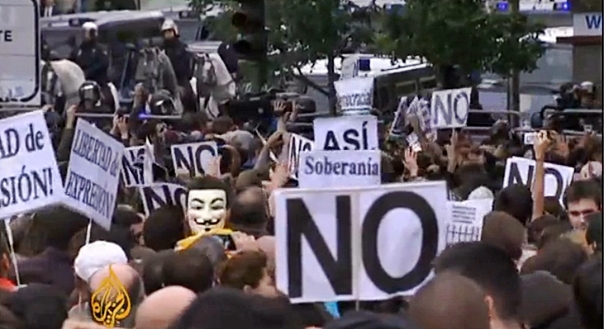 Almost 40 people were arrested in Madrid last night after thousands of people protested against the Spanish government’s continued austerity measures.

There wasn’t any trade union involvement in these latest Madrid protests, however. In fact, most people in attendance were just ordinary Spaniards who are angry that they are being asked to pay for government overspending and mismanagement in a new round of budget cuts.

The protests were to demand a dissolution of parliament and new elections, as protesters believe just about anyone can improve Spain’s economy more than current head of government Mariano Rajoy.

Protests were calm during the earlier part of Tuesday but, as night fell, people’s anger begin to spill over and was eventually directed at police. Riot police were called out and forced the protesters back with baton charges.

As AlJazeera reported, the Spanish police, however, seemed outnumbered as thousands of protesters refused to be pushed off the streets.

Almost 40 people were eventually arrested and several others were taken to Madrid hospitals for treatment for minor injuries.