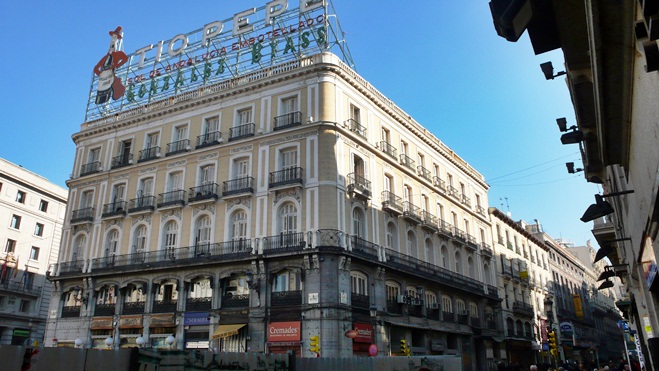 Before the Apple Store in Madrid could be opened to the public, the entire building needed major renovation work doing. That is when it was discovered the 15th century Buen Suceso hospital was still located in the Apple Store basement.

Well, not the whole hospital, but a couple of collapsing walls. In fact, the Buen Suceso hospital and a church of the same name were already demolished in the mid-1800s so the Puerta del Sol could be built in their place.

Although the hospital is an interesting archaeological find, the Apple Store says, unfortunately, the Buen Suceso hospital walls will not be made available for the public to view, as was the case when other walls from the building were discovered during the construction of the Sol Metro and Cercanías light rail station and they were put on public view behind a glass wall at the station.

Instead, the walls in the basement of the Apple Store in Madrid will be covered back up again with a new store floor.

However, the director of the Madrid Heritage Department, Jaime Ignacio Muñoz, insists the hospital walls will be protected, it is just that Apple and the Heritage Department didn’t see the point in putting in a glass flooring so people could see the walls below, as it was felt there wasn’t enough public interest in the old building to justify the expense.

As for the Apple Store, it will likely open some time in December. Just in time for you to buy an Apple iPad or iPhone so the US government can spy on you too.

The Almuñécar Friday market has the best bargains in town, and it’s huge

What You Should Know Before Shopping in Spain: Store Opening Times, Siesta, Customer Service and More

What does hasta luego mean in Spanish? Say goodbye the way people in Spain do it

What does feliz cumpleaños mean in Spanish? Did you just get older?

What are the qualifications to teach English in Spain?

How to make ceviche the Spanish way — easy, quick and delicious (video)

Where to buy the Best Tapas in Madrid, Spain (Video)

Who can get public healthcare in Spain and how do you register with the Spanish National Health System?

How much does renting a house or apartment cost in Spain per square metre?

Hotel Best Triton a perfect hotel for a winter holiday in Benalmadena, Spain

Logo for Seriously Spain from  LogoMakr.com