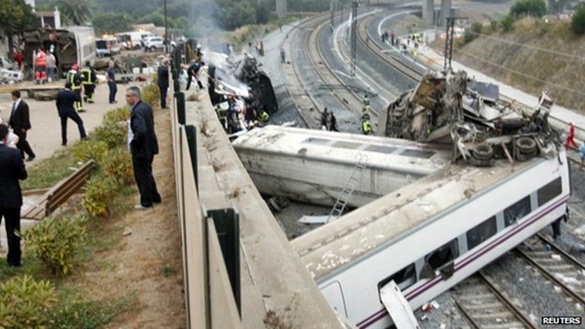 At least 77 people have died in a train crash in Spain.

The crash happened near the Spanish city of Santiago de Compostela when a train traveling from Madrid to Ferrol came off the tracks. All eight carriages were involved, with more than 200 people inside. It is the worst train crash in Spain in more than 40 years.

Renfe, the Spanish state-owned company that’s responsible for train operation in the country, have said they believe the incident was an accident. Government officials are backing them up saying there is no evidence whatsoever of foul play.

Several people on the train have told news media the train seemed to be traveling far too fast when it took a bend outside Santiago de Compostela and almost immediately afterwards left the track. El Pais is reporting a source saying the train was traveling almost twice the speed it should have been when it hit the corner.

At the moment, 77 people are confirmed dead, with more than 100 others being treated in hospitals for everything from light injuries to extremely serious ones.

More than 500 police, fire and hospital workers were either called to the train accident scene or to area hospitals where they helped with the injured.

You can find out more about the Spanish train crash at the BBC, or at El Pais if you can understand Spanish.