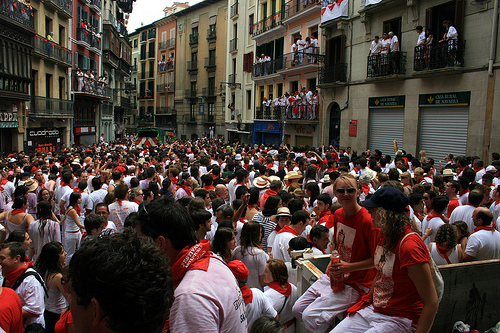 It’s partway through the San Fermin fiesta in Pamplona, Spain, the famous festival known for its running of the bulls events. Yesterday, Friday, saw the second bull run in the Pamplona series of eight runs and, as often happens, several injuries occurred when people running in front of the bulls either fell or were gored by a bull. Six of the injuries weren’t too serious but one, an Australian man, had to be taken to hospital after he was gored on the inside of his leg. Onlookers said it was his fault.

The 25 year-old Australian man was lucky his bull-related injury wasn’t worse. Apparently, he had taunted a bull upon arrival into the main ring but then stupidly slipped and couldn’t get out of the way when the bull charged him.

The San Fermin festival is held every year from July 6-14th. Fifteen people have been killed since 1924, with the last death occurring in 2009. Most deaths have been of Spaniards except for two. Gonzalo Bustinduy from Mexico was killed in 1935 when he waved his jacket at a bull and it charged him, and an American, Matthew Peter Tassio, who was killed in 1995 when he was also gored by a bull.

In the 2011 latest Pamplona injury, the Australian man is expected to make a full recovery.