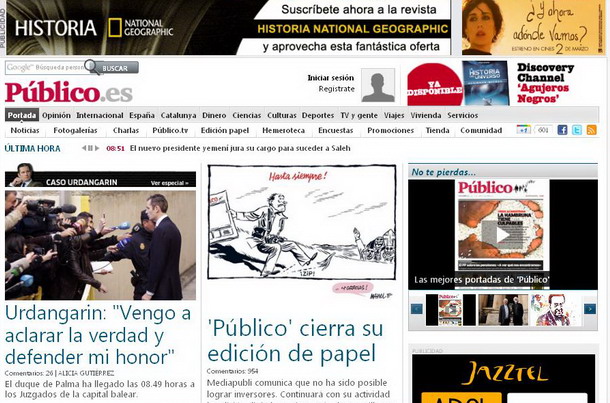 Publico newspaper, one of Spain’s most popular papers has announced it  will be ceasing publication of their print version of the newspaper after their last edition on Sunday. as owner Mediapubli failed to find investors for the bankrupt newspaper.  Newspaper workers, however, are still in talks about continuing the online newspaper Publico.es, with Mediapubli durrently saying the online edition is expected to keep going.

The Publico newspaper has only been in existence for the last four years but, during that time, has managed to get the support of millions of Spaniards plus 5.5 million users on their online website. Publico is currently Spain’s ninth most-read newspaper, which will be a real shame when iti does stop publishing.

Let’s hope though that the company can get Publico.es increasing in viewership, as well as in advertising revenue. Currently they don’t do a very good job of maximizing income potential online, so it’s quite easy to tell those running it aren’t too adept at the internet. Somebody really needs to give them lessons.

Publico.es website is huge, well-written and with hundreds of interesting stories every week but, instead of putting effective advertising on the site, which alone could have brought in millions of euros a year, instead Publico publishers kept the advertising to one or two Google AdSense ads, which don’t even load that often.

Special Note – The last edition of Publico was actually on Friday as, after this story was published, employees voted not to produce one last Sunday edition. The online version of the newspapers, however, is still up and running. Please give it a read and support them.