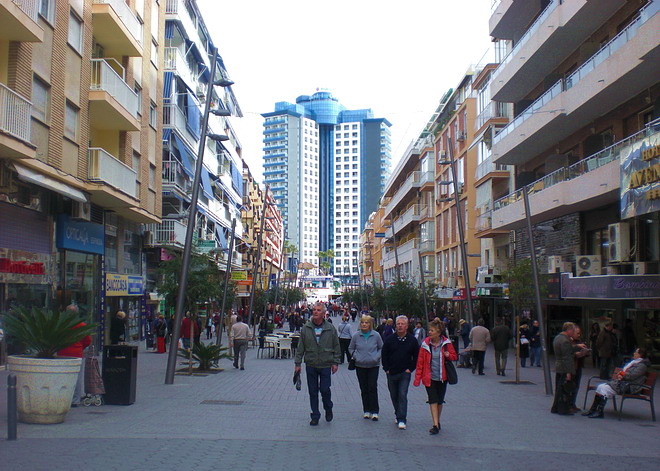 I was in Benidorm only three weeks ago, so was interested in the news today that Benidorm authorities may be extending the city’s pedestrian-only streets so the entire downtown central street area is one pedestrian-only area. Shop owners in Benidorm are asking for it apparently, as they believe it will increase the number of shoppers in the area, as well as improve the shoppers’ overall experience in the oceanside city.

Benidorm already has several of its main streets blocked off to traffic, including most of the old town shopping area. Walking around there last month, it was lovely to be able to shop in peace and walk and talk with the people I was with, without having to constantly be on the lookout for cars, motorbikes and other motorized traffic. It made the shopping experience that much more enjoyable.

With more streets becoming pedestrian-only streets, it likely would also open up more space for more of Benidorm’s wonderful side walk cafes to expand tables into the middle of the street. Adding more possible revenue to cafes and enhancing the ‘European’ feel of the place.

With cities all over the world more likely to be creating yet more space for cars, it’s nice to see Benidorm thinking about going in the other direction.