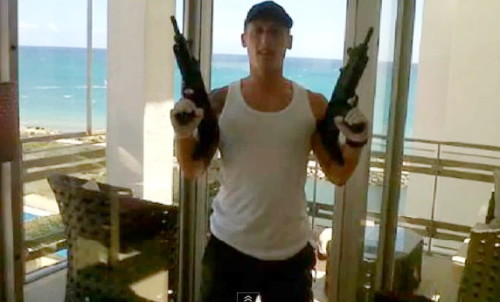 The Spanish police seem to be incredibly good at catching foreign criminals as can be evidenced this week by yet another arrest of a convicted British criminal. This time one of Britain’s most wanted fugitives was arrested in Calpe on the Costa Blanca in Spain.

The man, Andrew Moran, had been on the run since escaping from a Burnley, Lancashire court in 2009. He was being tried for armed robbery.

Spanish police say the British ‘most wanted fugitive’ was discovered hiding in a luxury Spanish villa complex in Calpe this week. Police crawled around the complex, hidden by walls, while Andrew Moran lay relaxing by the pool. At the signal, they all jumped over walls from each direction and consequently cornered Moran poolside.

Moran tried to escape by vaulting over a small pool outhouse but Spanish police were quick to grab him and handcuff him. The arrest was all videotaped by police and went off without a hitch.

Andrew Moran was convicted of armed robbery in 2005 after holding up a Royal Mail van outside the Asda supermarket in Colne, Lancs. He fled the UK in 2009 and, other than an almost-capture in 2012 in Murcia, Spain, he hadn’t been seen since.

Watch the video below for the actual police footage of Andrew Moran’s capture. Kind of cool really.