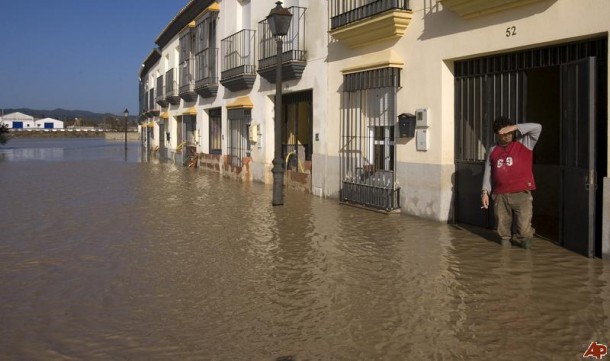 Ten people are confirmed dead in the worst floods Spain has seen in decades. Several others are reported missing, including a British woman who was apparently an employee of the Hotel Vera Beach in Vera, Almeria.

The woman’s name has not yet been released, but she is said to be 52-years-old. She was reported missing in Almeria yesterday said a spokesperson from the Andalucia regional government.

The ten confirmed deaths took place in Málaga, Almería and Murcia, with one death in Málaga, three dead in Almería and the most, four deaths, in the Murcia area. Spanish authorities, however, say there will probably be more dead as searches of the flooded areas continue.

Rivers have burst their banks, cars have been swept away and flood waters in some areas of southern Spain have reached to the roof level of houses and shops.  Some of the water has now drained, but residents are left with acres of mud and slime to clean up.

Some people are already saying their houses and all their possessions are a “complete loss” as water and mud inundated their homes up to the ceiling of the first floor.