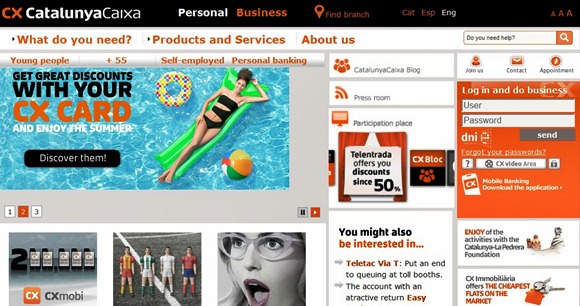 When Catalunya Banc, also known as Catalunya Caixa, was nationalized and bailed out with EU money last year, it didn’t take a rocket scientist to figure out the Spanish bank would soon be laying off a large percentage of its staff. That is indeed what is happening this month, with Catalunya Banc laying off one third of their staff in the next few weeks, or a total of 2,453 people.

Why is Catalunya Banc laying off staff?

Part of the reason for this is because Catalunya Banc is closing down 118 branches in the north eastern region of Spain, and is also be shutting down its entire commercial sector everywhere except in Catalonia. Many of the Catalunya Banc staff being laid off will come from these two bank shut downs.

A major reason for Catalunya Banc laying off staff is also, of course, that it’s part of an agreement they made with the EU when the bank decided to take EU bailout money last year. Sell off non-profitable sectors of the bank and layoff employees. So, that is what they are doing.

What will Catalunya Bank staff laid off get as compensation?

Of course, this being Spain. and with a government that has made sure anyone who gets laid off gets a mere pittance in redundancy pay, the only compensation laid off Catalunya Banc staff will get is 20 days pay for every year they have worked.

The Catalunya Banc staff who aren’t getting laid off (yet) can’t rest easy either. Most are being asked to either accept pay cuts or transfers to other Catalunya Banc offices depending on their jobs and where they work. Can’t say I’d be taking the transfer route, not with a bank this unstable.

Looks like Catalunya Banc is another Spanish bank to avoid doing business with as, let’s face it, the way they’re going they’re not likely to be around for long.