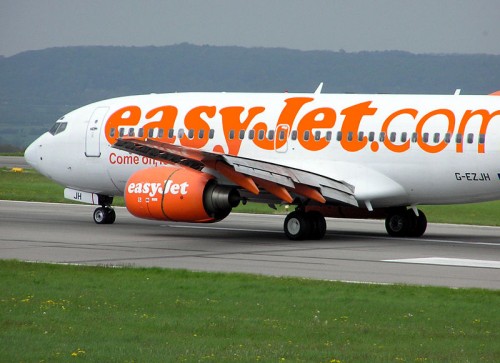 Yet again two British tourists, one drunk and one behaving badly, embarrassed themselves because of an excessive consumption of alcohol but, this time, they didn’t even manage to get to Spain to do it. Instead, they got into a fistfight on an EasyJet flight on its way to Alicante, Spain and the pilot had to make an unscheduled stop at Gatwick.

The problem started when a drunk 19-year-old-woman, and a 23-year-old man got into an argument soon after the EasyJet flight had taken off from Newcastle on Tuesday evening. Fists began to fly, cabin crew had to intercede, and the EasyJet flight eventually had to make an unscheduled stop at Gatwick.

Once the plane landed, the two were escorted off the plane and charged. The 19-year-old-woman was charged with being drunk on a plane, and the man with acting in a manner likely to endanger an aircraft.  The remainder of the passengers were delayed at Gatwick for over two-and-a-half hours before the flight could take-off again to Alicante, its final destination.

Right after the incident, Sussex Police released a statement that said:

On Tuesday evening, 15 May, police were called to an Easyjet aircraft which was coming in to land at at Gatwick having been diverted en route from Newcastle to Alicante because of a reported disturbance on board. The flight arrived just after 10pm and officers boarded the aircraft and arrested a man and woman.

You seriously have to wonder what on earth is wrong with so many young British people today. Fist-fights, drunk and disorderly, and behaving so badly anyone’s parents would be ashamed, and this seems to be how millions of Brits behave, in Spain, and elsewhere. Embarrassing to be British? It certainly is.