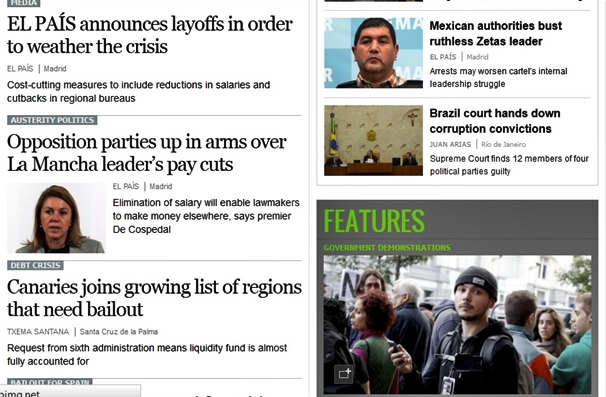 Bad news for staff of El Pais this week, as Spain’s biggest newspaper announced they were going to have to do a round of layoffs. They’ll also be cutting salaries of many of the staff that don’t get let go. Why? According to the president of PRISA, the company that owns El Pais, they’ve seen a serious drop in advertising revenue due to Spain’s failing economy. So cuts have to be made somewhere.

The El Pais layoffs are very sad news for the newspaper. It’s been around for 36 years and, up until the last couple of years, has done very well. As one manager said, it’s not like the company is just trying to increase profits and that’s why they’re laying people off. It’s simply that they just don’t have enough money coming in to pay all the bills.

Another manager hinted they might be going to completely overhaul the digital edition of the newspaper – which, frankly, would be a good thing. The digital El Pais is bland in design and with content not updated that often there’s little impetus to keep going back.

What’s odd to me to is any website owner knows the best way to make money is to have Google AdSense on your site. Yet El Pais keeps turning it off, meaning when readers even do bother reading a digital page the newspaper isn’t making any money on it.

As for the layoffs, there’s no word yet on which of the newspaper’s editorial staff it’s going to affect. We wish everybody well, whoever it is and do hope El Pais manages to keep its head above water. It would be a shame to lose it.