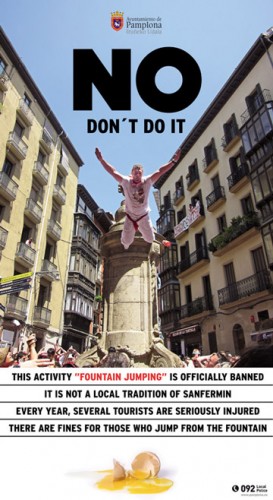 While you might be forgiven if you think ‘fuenting‘ is something you do that’s rude and that’s why Pamplona, Spain is banning it, it’s actually not. Fuenting, in fact, is the act of climbing up and jumping off the Navarrería fountain during Pamplona’s famous San Fermin Fiestas. It’s also something Pamplona’s City Hall is sick of. So sick of it, they’ve gone ahead and banned it.

As Pamplona’s City Hall says, fuenting may look like fun and, sure, it might be for those people who do it — at least for the second or two they spend falling before they hit the ground. But, it’s also quite a dangerous thing to do, with several tourists seriously injured every year after doing it. Hence, the current ban on fuenting.

So serious is the town’s city council about it, they’ve even had posters produced. Written only in English (which would lead you to think it’s only foreigners that ‘fuent”), they’re going to be hung all over Pamplona before the next San Fermin Fiestas at the beginning of July.

“NO. Don’t Do It”, the posters say. You can’t be much more direct than that, eh?

Well, the large fine you will get if you decide to go ‘fuenting’ in Pamplona this year will also prove how serious they are.