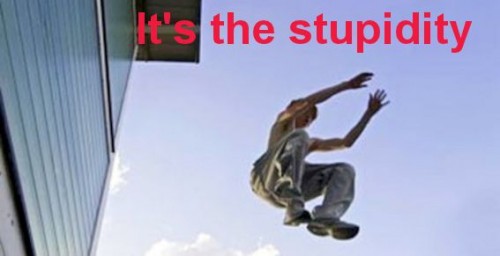 Yet another foreign tourist has been killed while ‘balconing’ in Spain, this time a 19-year-old German man. With so many foreign tourists dying each year in Spain from the idiocy of balconing, you’d think the Spanish police would be handing out flyers at the airport  – “If you kill yourself while balconing, we won’t be the ones scraping your brains up off the pavement. We’ll send for your parents, who should have taught you to have more common sense”.

The latest death by balconing happened in Lloret de Mar at around 4am on Friday morning, when a German boy/man (I mean, how can you keep putting ‘man’ and ‘woman’ when these people show they have about two brain cells?)  decided to try to get from one apartment to another by using the balconies. He fell. To his death.

Spanish police, as usual, were quickly on the scene but could not revive him. As per usual, alcohol was probably a factor.

Again, we have to ask – HOW MANY PEOPLE HAVE TO DIE WHILE STUPIDLY BALCONING IN SPAIN BEFORE YOU GET A CLUE?

And the only unusual thing about this case? This time, the dead person wasn’t British.