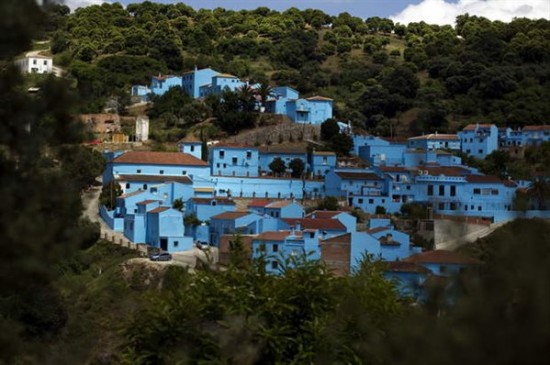 Over the weekend, tiny Júzcar in Malaga province voted. Not in any general election, but to decide if the townspeople wanted Júzcar’s buildings to remain blue, after they were painted blue in the spring of 2011 as a way of celebrating the then-new Smurfs movie.

At the time, movie studio Sony needed a small Spanish village that would be willing to be painted blue as a publicity stunt, and a tourist spot, for the Smurfs 3-D movie. Júzcar volunteered and Sony paid for the village to be painted.

In the contract was the agreement Sony would pay again to have the entire village put back to its original white, once the Smurfs hoopla died down. But the townsfolk in Júzcar seemed to like being blue (it really is very pretty) and it brought busloads of tourists to the village too, which has certainly helped during Spain’s dismal economic recession.

So, in a vote on Sunday, they decided and ‘blue’ won overwhelmingly with 141 people wanting the blue to stay and only 33 preferring white. Blue it will remain.

As for the Smurfs 3-D movie, which is known as Los Pitufos 3-D,  so far it’s made $562 million, so yes, the film was a success too. In fact, it looks like everything the Smurfs touch comes out ‘green’ and not blue.