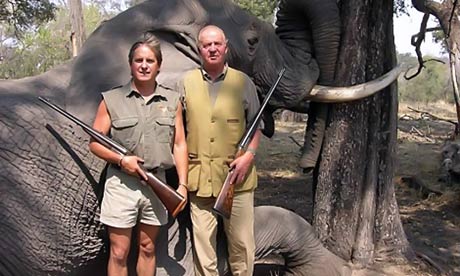 News for Spain’s royal family has been bad this week with King Juan Carlos’ 13-year-old grandson shooting himself in the foot last week during a hunting accident and then King Juan Carlos himself breaking a hip while on an elephant hunt in Botswana. Reports are a little sketchy but it seems the 74–year-old King fell down some steps and broke his hip in three places. He had to be airlifted back to Spain on a private plane for surgery and recovery.

The King had already been criticized by many Spaniards for taking such an expensive hunting trip (reportedly it costs around 30,000 euros to kill an elephant), especially at a time when many Spaniards are finding it difficult to even pay basic bills and when Spain has Europe’s highest unemployment. He’s also being criticized by animal rights activists in Spain and other countries for his posing in front of a dead elephant as well as with two dead water buffaloes.

It would seem to us King Juan Carlos shouldn’t be anywhere near a gun, after all it’s alleged he shot and killed his own brother in a shooting accident while still a teen.