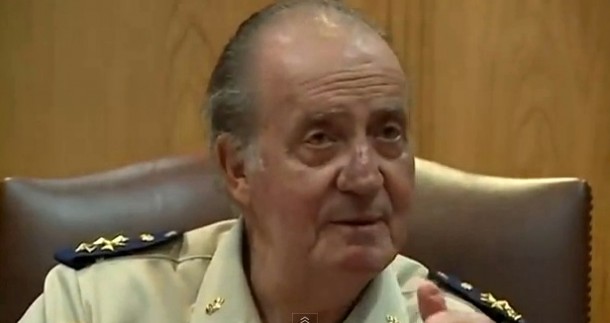 He has already broken a hip this year while hunting elephants on safari in Botswana. So it was with horror that Spanish army officials looked on in Madrid yesterday as King Juan Carlos tripped over a step and fell face first to the floor.

Everyone rushed over to help and the King was quickly scooped up and taken inside to recuperate. He appeared at a press conference a little while later looking no more the worse for wear, except for a large bruise across the bridge of his nose.

Just before the incident, the King had been inspecting his troops at army headquarters in Madrid. All smiles and looking quite relaxed, only a few seconds later he appeared to trip over a step and went flying through the air to land flat on his face and stomach.

At 74-years old, breaking a hip can be the result of such a hard fall.

This time, thankfully, King Juan Carlos was lucky. A bruised ego was all he seemed to suffer. Then again, maybe it is his karma quickly arriving to punish him. For shooting elephants he should never have been shooting.