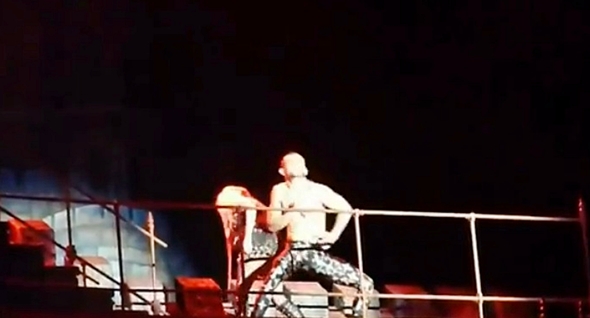 Lady Gaga was the second celebrity in as many weeks to throw up while on stage in the middle of a concert. Justin Bieber did it a couple of weeks ago, and now Lady Gaga has joined the club as she threw up while performing at a concert in Barcelona, Spain on Saturday.

Gaga was apparently almost at the end of her set for the night at the Palau Sant Jordi in Barcelona when as she walked down the stage stairs midway through singing The Edge of Glory, eant over to the back of the set and up came whatever she’d eaten previously.

You have to give the diva credit though. Although her co-dancer looked a little unsure of what to do for just a second there, Gaga immediately continued dancing and singing just like nothing had happened. She then finished the concert without a second incident.

“Was praying nobody saw, but actually it’s quite a good laugh if u need one!

That is the trouble with today’s instant media. Not only do people video tape unfortunate things that happen to celebrities, they release the videos to YouTube so the rest of us get a chuckle.

No word after Lady Gaga’s Barcelona mishap, but from her tweet at least she appears to be just fine.