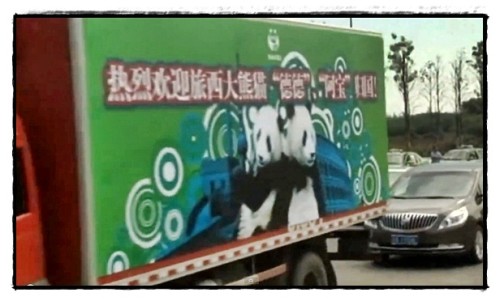 Two and a half years after their birth at a Madrid zoo, two giant pandas called Po and De De have left Spain for China this weekend arriving in their new home in Sichuan province late last night.

The giant panda twins were sent to China as, under an agreement with the Chinese government, any country that accepts a loan of giant pandas, as did Spain with the twins’ parents a few years ago, must give any panda babies back to China two years after their birth.

Po (known in China as ‘A Bao’), and De De’s new home will now be the Chengdu Research Base of the Giant Panda Breeding Program, where once they are older both will eventually be paired with mates.

China takes their giant panda breeding program very seriously as there are so few giant pandas left in China. That is why the Madrid pandas had to leave Spain, so that the breeding program in Sichuan continues to have young blood in order to ensure the survival of the panda species.

According to a keeper at Madrid Zoo, both Po and De De were a little upset when they left Madrid as they were not used to being transported in giant cages and, of course, had never been on a plane.

But, by the time they arrived in Sichuan both pandas seemed much calmer and were soon nosing around their new living quarters.