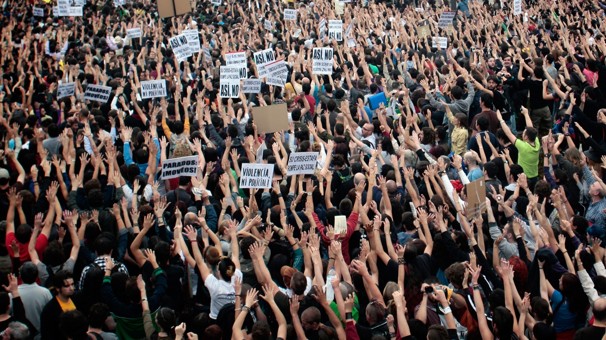 After days of arguing and fights with Spanish police, protesters have finally been allowed to return to Madrid’s Puerta del Sol. Madrid authorities say they will allow protesters to gather but tents and other semi-permanent structures will not be allowed. This to stop the absolute take-over of the square as happened a few months ago.

Protesters began gathering in the Puerta del Sol back in May, to protest goverment cuts and Spain’s high unemployment rate. At one point, more than 10,000 people were gathered at the square, with many living there full-time for weeks at a time.

On Friday though, the Madrid government made it clear this would not be allowed to happen again and, that if it did, police would be mobilized to stop it.

Once moved back into Puerta del Sol, protesters decided last night to hold a large rally today in the Plaza de Castilla. This will be to draw attention to the four demonstrators still being held in police custody and to ask for their release.

This is a video shot of protesters in the Puerta del Sol back in May.