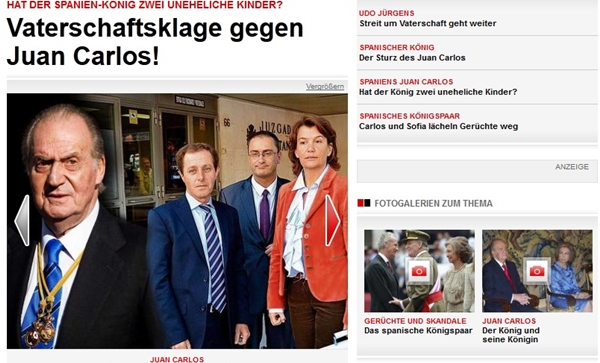 Spain’s King Juan Carlos is in the news again, and it’s not good. According to German newspaper Bild, two people — a man and a woman — are claiming to be the ‘bastard children’ of King Juan Carlos with one, the man, claiming he’s actually the rightful heir to the throne (since when did European kings recognize their bastard children, let alone allow them to ascend the throne? Historical comment, there, by the way).

The two people, one a Catalan man called Albert Solà Jiménez and the other a Belgian woman in her mid-40s, say they want DNA tests to be performed so they can prove they are the natural children of the Spanish king.  Jiménez also says, because he’s 56 years old, that makes him the rightful air to the Spanish throne as King Juan Carlos’ current heir, Prince Felipe, is 12 years younger than him. (Sure, like that’s going to happen!)

Of course talking about illegitimate children, mistresses and other sordid stuff is typical Bild newspaper fare. Bild is a tabloid that was known for decades for its front cover photographs of topless women, and was also the main newspaper to talk about King Juan Carlos’ supposed-mistress earlier in the year. So to see more trash from Bild, no, not surprising.

We wonder how long it will be before King Juan Carlos gets sick of the accusations coming from that direction and sues? After all, Prince William and his wife Katherine recently won their lawsuit against a French newspaper showing royals can fight back. And we love it.