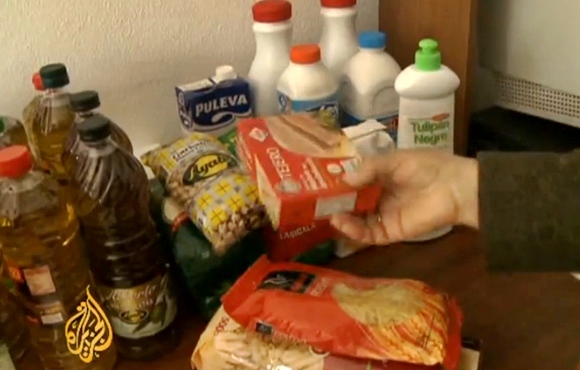 As the economic crisis in Spain worsens, many Spaniards are now relying on food banks in Spain to survive. In some towns like the tiny town of Espera in southern Spain, almost 60 percent of the population are unemployed. That means, without an income and with unemployment benefits running out, many of them cannot even afford to put enough food on the table for their families.

Hence the increase of food banks in Spain either connected to the Catholic church or to various Spanish non-profits.

Up until the last few years, food banks in Spain were not a frequent occurrence. But, due to the worsening economic crisis, more and more Spanish food banks are popping up as increasing numbers of Spaniards lose their jobs and end up on the unemployment line. Very sad indeed.

If you’d like to make a monetary donation to a food bank in Spain, you can make a direct donation from your bank account to one of the bank accounts of the Banco de Alimentos de Madrid — see link here for their various bank account numbers.

They head 54 food banks all over the region, and distribute food to tens of thousands of Spaniards every year.