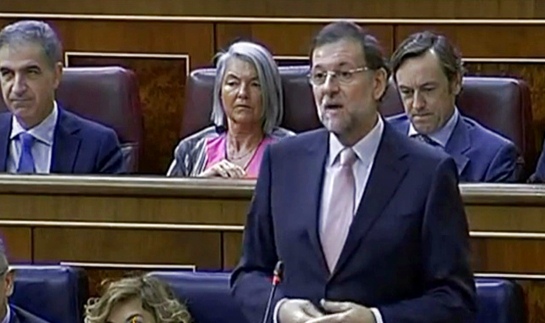 When Mariano Rajoy, Prime Minister of Spain, gives his ‘State of the Nation’ address later today, you can bet he won’t be addressing questions about his alleged acceptance of under the table cash payments.  As that’s something he simply refuses to do.

But, that’s what most Spaniards are interested in hearing — not a State of the Nation speech by Rajoy trying to convince people the Spanish economy is heading in the right direction (it’s not!) but instead Mariano Rajoy actually answering questions about his involvement in a slush fund cash payment scandal that simply won’t go away.

Of course, Mariano Rajoy isn’t the only politician facing questions about corruption in Spain.

As this Aljazeera report states, more than 300 Spanish politicians throughout the country are now facing graft allegations, including the son-in-law of King Juan Carlos.

Sad for Spain that many of its politicians, including the Spanish prime minister, seem to think shoving through austerity measures that aren’t working is more important than managing their own corruption and greed.