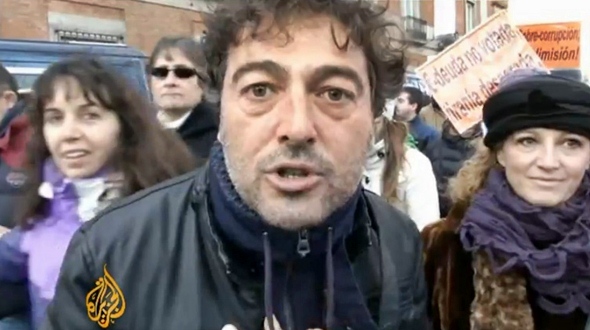 Instead of the usual protests involving a specific group of people, these austerity protests included just about everyone — miners, education workers, students, health workers, and even judges — all complaining about the drastic cuts the Spanish government keeps making and many calling for the resignation of Mariano Rajoy.

When asked, protesters said they were fighting for themselves, their elderly parents, their children, their country and their future — and, not surprisingly, many people involved in the demonstrations are Spain’s middle-class.

With 25 percent of Spanish workers now unemployed, they are the ones who seem most tired of corrupt politicians, and were intent on getting out on the streets to prove it.

Riot police were eventually called in towards the end of the day for some protesters in Madrid who set fire to garbage cans and caused a public disturbance. 45 people were arrested and several police officers were injured.

All I can say is, before it gets better in Spain it’s likely to get a heckuva lot worse and these mass austerity protests will only get bigger.