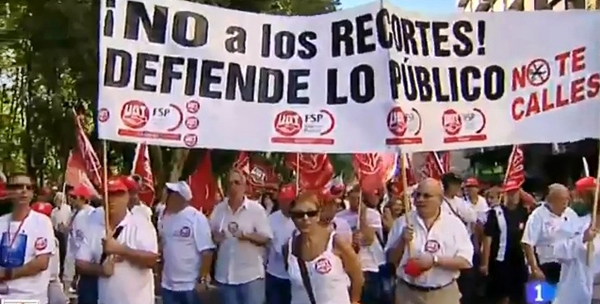 Several hundred thousand people from all over Spain demonstrated in Madrid on Saturday in an attempt to force a referendum on the country’s latest austerity measures. The demonstration was organized by the CCOO and UGT unions as well as more than 150 smaller organizations, who had put on more than 1,000 buses to ferry people into Madrid from all over the country.

The Madrid demonstration was organized as Spaniards are particularly concerned about recent cuts in education and health. They don’t want Spanish society to be changed forever as drastic cuts going into effect threaten to destroy what ordinary people hold dear.

The protesters are also worried about tax increases, which are already proving to be a hardship to the working poor and middle class. They say the cuts and the tax increases are only impacting these two classes, while the wealthy and large corporations are not being targeted by the right-wing government of Mariano Rajoy at all.

Rajoy continues to say the austerity measures he’s implementing are “unavoidable”, but hasn’t commented on why these measures are not being targeted towards those with money.

On Saturday, demonstrators wore different colored shirts depending upon their profession. Teachers were in green,  women’s rights groups in purple, white for those in the medical profession and black for people who work in public services or government offices.

Before the demonstration even started, the two major unions said if there wasn’t a referendum on the issue, there would be a general strike in the next few weeks. They also plan more large protests in the coming weeks.