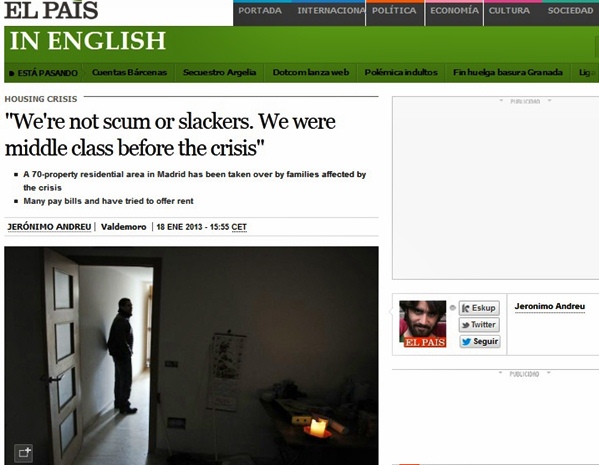 You know things are not getting any better in Spain, no matter what Prime Minister Mariano Rajoy says, when former members of the Spanish middle class are now forced to be squatters in abandoned buildings as they have nowhere else to live.

El Pais has a heart-wrenching story on their internet edition this weekend profiling former middle class Spaniards who, only a few years ago were paying mortgages on homes. Today, they’re living in abandoned apartment buildings in Madrid after losing their jobs and not being able to keep up on mortgage payments.

What’s even more sad about the story is they were willing to come forward, even though they’re squatting in abandoned apartments illegally, simply to tell other Spaniards “we’re not scum or slackers”. We are just like you.

You have to ask what does it say about a government that they are allowing this type of thing to continue, while still continuing to bail out the banks that caused the financial crisis in Spain in the first place?

Nothing complimentary. That’s for sure.