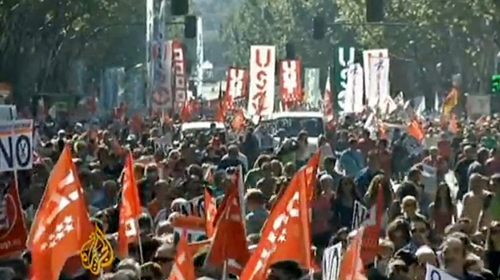 New street protests broke out across Spain in more than 57 cities on Sunday blocked traffic and caused inconvenience for millions of Spaniards.

The Spanish street protests were, as usual, against the extreme austerity measures of the right-wing government of Mariano Rajoy — measures which a large percentage of the Spanish population say are killing the country’s economic recovery chances.

Anti-austerity marches in Madrid saw around 60,000 people out protesting on Sunday against cuts to social services — cuts to education, cuts to pensions, cuts to salaries, cuts to public health.

Protests in Madrid and across Spain were organized by hundreds of Spanish unions, with Madrid now being named as one of the top European cities for protests because of it. More than 2,000 protests in 2012 so far. In fact, there are so many demonstrations in Madrid nowadays, the city is brought to a standstill in certain areas almost daily.

On Saturday, health care workers were out protesting en masse with hundreds of health care groups bringing members and employees into Madrid to demonstrate.

All groups protesting are furious at the cuts being implemented by Mariano Rajoy’s right-wing government. They’re also angry that he is still continuing to say Spain will not need a bailout when just about any financial analyst knows this is not true.

Rajoy, of course, is basing his “no bailout for Spain” comments on projected growth that most analysts say is impossible.

Expect more protests in Madrid and around the rest of Spain while the country’s economic crisis continues, and while Mariano Rajoy continues to be in office.