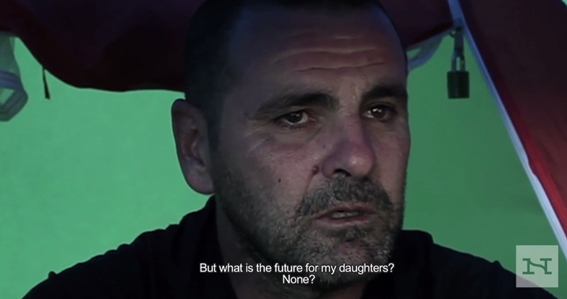 ‘No Job Land’ video goes viral on the internet

A new Spanish video called ‘No Job Land‘ has gone viral on the internet. In the video, produced by three Madrid-based journalists, three unemployed families talk about the struggle of surviving in Spain when jobs are non-existent and Spanish unemployment benefits don’t cover even the basic necessities.

The video created by Olmo Calvo, Eva Filgueira, and Gabriel Pecot is just seven minutes long but gives an excellent rundown of the problems unemployed Spaniards face from the minute they find out they have lost their jobs.

Unemployment benefits kick in but soon run out, mortgages cannot be paid, electricity, food and medical care need to be paid for, and the threat of eviction and homelessness is very real.

These three families, instead of continuing to feel completely helpless, joined a Madrid protest group and set up tents on a city park to let people know about the plight of Spain’s unemployed and what they want to happen – “social justice and a decent job with decent rights”.

Meanwhile, Spain’s current Prime Minister Mariano Rajoy is seen on TV saying the bad times are coming to an end. Easy to say if you’ve been taking thousands of euros in illegal bribes for years.

You can watch the ‘No Job Land‘ video above or on Vimeo. The video was produced for the website Narratively, and its series ‘Patchwork of Poverty’.