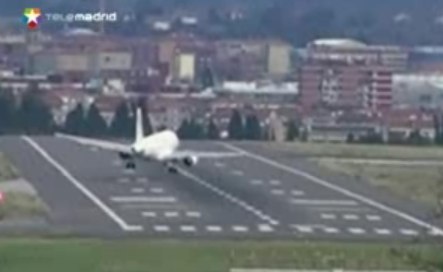 Although flying into Bilbao, Spain isn’t always a fight against high wind and severe cross winds, sometimes it is as Bilbao Airport is known for its strong cross-winds and subsequent rocky landings.

As you will see on the video below, some passengers coming into Bilbao, Spain a couple of years ago were in for the ride of their lives as planes flew in practically sideways, with pilots either managing to straighten up and get the plane under control once the wheels had hit the runway, or having to get the plane back up in the air again and go for another try.

Some planes had to be diverted to another airport. The scary high winds Bilbao Airport sometimes gets will do that to you.

I have actually been in a plane that had to do that, not in Spain but in the US.

We came into a landing in North Carolina with the plane almost flying sideways. The pilot tried to get the plane straight enough as it headed towards the runway to land safely but, due to the strong winds, he couldn’t. So back up in the air we went, an incident that was very scary as things began to fly around the cabin, bags fell out of overhead compartments and some of the duty-free bottles smashed.

I wouldn’t like to have to do that every day, that’s for sure.

But it does show you how skilled so many airline pilots are. Pilots flying into Bilbao Airport are especially skilled and, let me say, especially prepared for these kinds of airborne acrobatics too.