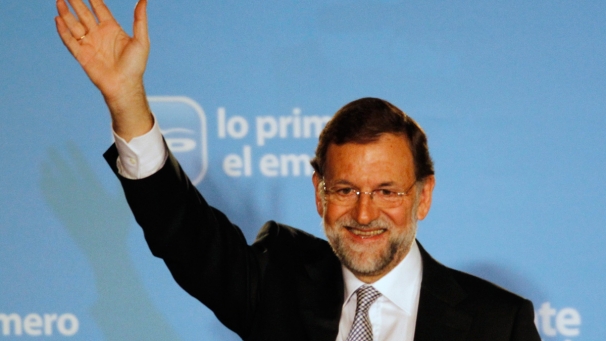 Well, Spanish voters made the mistake we thought they would in yesterday’s general election by voting in the right-wing Popular Party (PP) in an absolute majority.  Exit polls gave the PP 181-185 seats in Congress, with only 176 needed for an absolute majority.  At 10:40 pm Spanish time, Mariano Rajoy gave his victory speech promising to govern with “humility, and saying he was aware how difficult the challenge of governing would be.

One of the things Rajoy has promised to do is to cut the budget. Spain’s obligations to its euro-zone partners will require a budget cutback of around 21 billion euros in 2012 in order to reduce the wanted deficit to 4.4 percent of GDP. In a country already with the highest unemployment in the developed world, you can only imagine how many programs will be cut, and how many more jobs lost. What Spaniards were thinking in voting in the Popular Party, when their only plan is to slash the budget, boggles the mind.

As Alfredo Pérez-Rubalcaba, the Socialist prime-ministerial candidate, warned, the Popular Party are likely to favor the rich ie: no higher taxes for the rich, and slash welfare claims for the poor. Nothing they do will help the average Spaniard, but will only be done to keep the financial markets happy.

Spain is now in for an even bumpier ride, and don’t expect many Spaniards to end up happy. Voting in the Popular Party will likely end up one of the worst things Spanish voters ever did.