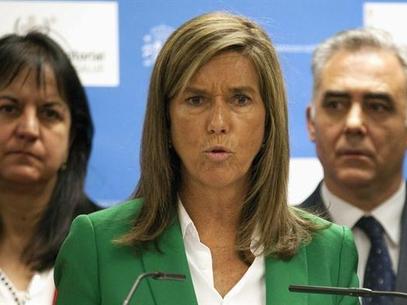 Spanish health minister Ana Mato is allegedly just one of the Popular Party members who accepted bribes from the Gürtel business group in exchange for government contracts, or so says a new El Pais story. Not only did the Gürtel group bribe Ana Mato with all-expenses paid trips to Finland and Dublin for both her and various family members, they even paid for Mato to take her family to Eurodisney.

The bribes Mato allegedly accepted didn’t include any average hotels either. No, senora. Instead they included hotels in some of the best areas of the cities they visited. Rooms on top floors, with city views and of a size that would probably sleep a fair number of Spain’s current homeless population.

Ana Mato, as to be expected, denies she ever accepted bribes from Gürtel, and says she doesn’t remember anyone ever paying for family trips. Except herself and other members of her family, that is.

But, that’s not what documents show. They show Mato’s husband, Jesús Sepúlveda, taking care of organizing the trips through the Gürtel group along with help from the now-disgraced former Popular Party treasurer Luis Bárcenas. At least 15 trips, one of which even included breakfast with characters from the Disney theme park.

Amazing isn’t it? While the Popular Party keeps denying they had anything to do with accepting bribes from companies in exchange for government contracts, more and more evidence that they in fact did comes to light every week.