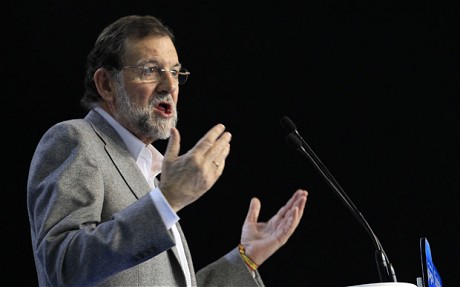 Why are Spaniards surprised that the new government of Mariano Rajoy lied during their election campaign about “no new taxes”? Not even in office for a month, and Rajoy has already announced new taxes will be applied to everyone in 2012, even to those on the lowest incomes. Rajoy’s government has also announced massive 8.9 billion euros in cuts – a move guaranteed to damage Spain’s economy even further, and plunge the country into an even deeper recession.

New across-the board hikes in personal income tax  will be applied of between 0.75 percent for those on lower incomes and seven percent for those who make more than 300,000 euros annually. They say these new taxes will only be in effect for “two years”, but when, not a month after the election, they’ve already gone back on their word, why would anyone think “two years” will be any different?

Of course, like every new government that doesn’t have a clue what it’s doing, they blame the one before. In Rajoy’s case, Deputy Prime Minister Soraya Sáenz de Santamaría blamed former Prime Minister Zapatero’s government’ saying “This is an exceptional move that we didn’t foresee. We had to resort to this because the previous government did not comply with its goal in reducing the deficit.”

Lies, lies and more lies, and new taxes obviously already planned but not announced during the election, as Rajoy and his co-horts knew they wouldn’t be elected if they did.

Rajoy’s government will also freeze the minimum wage at 641.40 euros per month. Now how could anyone in Spain actually survive on that?