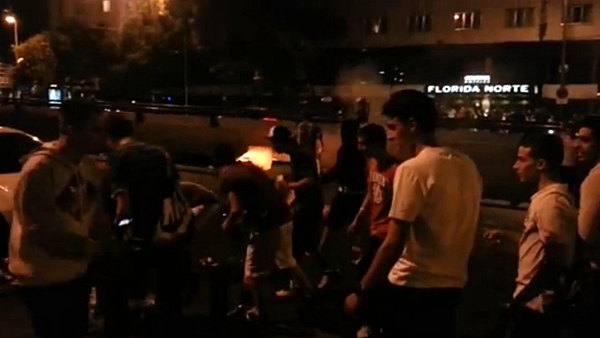 When you think of Spain, you don’t usually think of riots and fights. That is why it was so surprising on Friday night/early Saturday morning when a mini riot and fights broke out at the MTV Beach Festival in Madrid, Spain.

According to Spanish police, around 1,000 people ended up in the riot and fights with at least 60 of them being injured. Twenty of the injured were police.

Spanish TV reported the riot began when a group of young Spaniards without entrance tickets tried to get into the MTV Beach Festival by throwing bottles, then climbing a wall and moving various barriers that had been erected to prevent access to the festival.

Fights ensued, along with injuries and various arrests. All told 11 people were arrested for disturbing the peace or for attempted injury of police officers, and 10 people required hospitalization.

Spanish police even had to break out the riot gear and fire rubber bullets into the crowd as they were attacked with bottles and other objects, and garbage cans and litter were set on fire. The rampage continued with more youth joining to attack police and to damage sign posts and other public property.

The situation eventually ended up under control and peace was restored around 5am. MTV, so far, has had no comment about the incident.