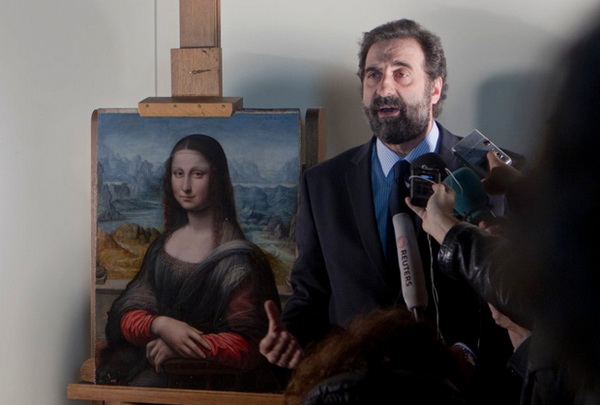 One of the biggest news stories in Madrid this week is the opening of Room 49 at the Prado for the re-exhibition of ‘the other Mona Lisa‘, a copy of the famous Da Vinci painting likely painted by one of Da Vinci’s apprentices. It will be at the Prado until March 13th and, if preliminary crowds are anything to go by, it’s going to be one of the most popular exhibits the Prado has ever had.

Once the Prado exhibition is at an end, ‘the other Mona Lisa’ will travel to the Louvre in Paris for a couple of months, before it will return to the Prado and take up permanent residence — again.

‘The Other Mona Lisa’ was likely painted by a Da Vinci apprentice around the same time the master was painting the real one.  It was recently restored by Spanish restoration specialist, Almudena Sánchez, a job which took more than four months to complete but that revealed details the Prado did not know existed before.

In fact, up until the restoration took place, it was thought the Prado’s painting was nothing more than a copy that had been made years after Da Vinci completed the original Mona Lisa. It’s only now art experts have realized that this painting was created at the same time as the original, a fact they realized when restoration revealed details underneath layers of varnish that could only have been painted at the same time as the original painting.

If you want to be one of the first to see the restored version of ‘the other Mona Lisa’, rush to the Prado in the next three weeks. If you have a bit more patience, she’ll be back permanently sometime in early July, so you can see her then.

It is actually interesting to compare the two paintings as, when you see one obviously painted by someone who is not Leonardo Da Vinci, it makes it so much easier to understand the true brilliance of the man.