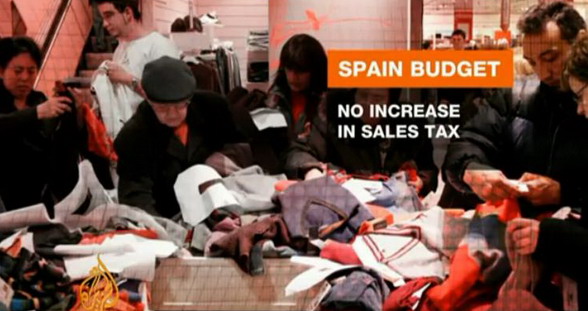 As Spain’s precarious economic status continues to worsen, Spanish prime minister Mariano Rajoy announced a new austerity package of 27 billion euros in budget cuts and tax increases on Friday, all in an effort to stave off a bailout.  In the latest austerity package, the government plans on saving money by cutting ministry budgets by up to 17 percent, increasing energy prices, and reducing overseas aid.

In fact, as belts are tightened, the Spanish public is becoming increasingly sick of austerity.

Plus, in coming months, the money spent by the government in Spain will be less and less and more and more businesses will lay off workers and more companies will go bankrupt, and tens of thousands more will be added to the unemployment rolls.

At Seriously Spain, we expect Prime Minister Mariano Rajoy to be out of office within a year. His budget cuts and austerity don’t stand a chance. And neither does he.