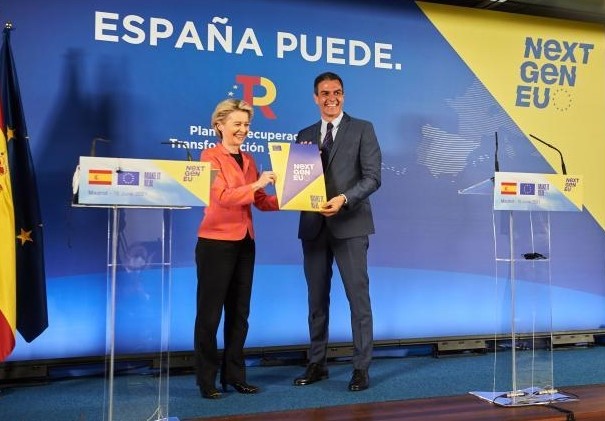 It is over a year since it was announced Spain would be getting €140 billion from the EU coronavirus recovery fund, but that money has been a long time coming.

Especially as, when the funds were finally approved, the  €140 billion ended up being €70bn in direct aid, and an additional €70bn as a loan.

Finally this week, Spain has received the first installment from the fund.

It is only €9 billion, so there is much more yet to come, but the money will hopefully allow Spain to put into effect some of the enormous transformations President Pedro Sánchez has been promising.

Transformations that are supposed to make Spain much more resilient financially should another financial crisis hit.

The €9 billion awarded to Spain works out at just 13% of the non-repayable money the EU has awarded Spain.

Spain is the second biggest recipient of money from the EU coronavirus recovery fund after Italy, with around €750 billion set to be distributed.

Worryingly, however, the money comes from the EU collectively borrowing the money on the international markets in order to finance the stimulus plan.

What that will do to the EU’s ability to further its own goals has yet to be stated.

The money was awarded to Spain after the country’s government submitted a plan that focused on green, digital and gender equality solutions.

As European Commission president Ursula von der Leyen commented about the €9 billion, “This disbursement of Next Generation EU funds launches the implementation of Spain’s recovery and resilience plan.

The ambitious plan will provide a crucial push to make the EU Green Deal a reality, further digitalize the economy and make Spain more resilient than ever.”