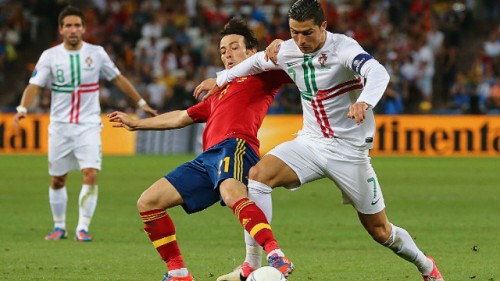 It wasn’t exactly one of Spain’s best football games. After all, the Euro 2012 semi-final game against Portugal didn’t have any goals and Spain finally won it on penalties.

But, win it they did, and that puts Spain in the Euro 2012 finals. Nice news when everything else seems to be going so badly. Plus, it puts Spain in its third consecutive Europa Cup final — not seen since Germany last did it in 1976.

Spain’s semi-final against Portugal really was a boring game. A lackluster performance from both sides, with Spain only seeming to pick up some energy during extra time.

Then it came down to penalties and Spain beat Portugal 4-2, thanks to Cesc Fabregas striking the winning spot-kick and to Iker Casillas and his usual stellar goalkeeping.

As for Portugal, for some odd reason they put Cristiano Ronaldo, their best player in place to shoot Portugal’s fifth penalty shot. Needless to say, Spain got their first and beat them roundly 4-2. So, no goals for Ronaldo and no penalty shot either. Oh, and did we mention, no Europa Cup final?

Spain now goes through to the Euro 2012 finals, and will play whichever team wins the Germany vs Italy game tonight. We’re rooting for the Italians.

And, if you missed it, here are the penalties. Pretty darn amazing.