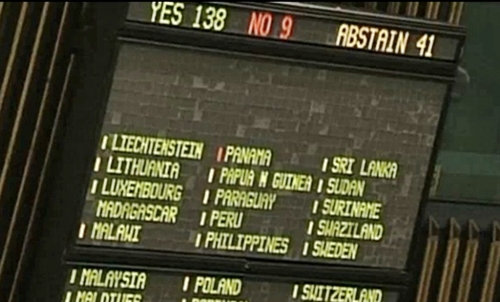 More and more lately, I’m proud to love Spain and to spend much of the year living there. No more so, however, this week when Spain voted in favor of UN observer status for Palestine at the UN General Assembly. And they even did it despite bullying attempts by Israel to stop them.

During last week’s discussion about the Palestinians’ right to have UN observer status, Spain’s Foreign Minister, José María García-Margallo, made it quite clear Spain would be voting in favor of the Palestinians when he stated,

‘Spain has always been a pro-Palestinian country, and this will never change’.

Once it became clear Spain wouldn’t be swayed by Israeli demands for them to either vote no or abstain, however, Israel then attempted to stop Spain voting on the Palestinian side by threatening they could be left out of the peace negotiations. With their yes vote for Palestinian UN observer status, Spain gave a big fat middle finger to Israel. Good on ya, Spain.

The final vote of the 193-member UN General Assembly was 138 in favour of the plan, 9 against (Israel and the US included in this, of course) and 41 abstentions.

The British government, unfortunately, abstained proving my point once again — it’s more and more embarrassing to be British these days as successive British governments continually prove they are nothing more than America’s pet dog. Maybe it’s time for me to become Spanish?