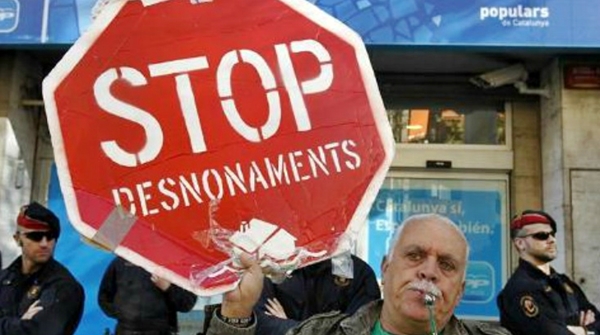 As the economy continues to worsen, suicides in Spain are on the rise. So, on Monday, Spain’s political parties planned to deal with eviction reform after the Spanish public has held demonstrations where protesters call the Spanish banks “murderers” and “complicit in murder.

More than 400,000 Spanish families have been evicted from their homes since 2008 but the suicide of 53-year-old Amaia Egana last week right before she was to be evicted has infuriated the Spanish public.

Their anger is now directed towards banks who have been the beneficiaries of more than 100 billion euros of bailouts using taxpayer money but who are still continuing to evict people from their homes. That is why Spanish prime minister Mariano Rajoy has no choice at this point but to consider eviction reform.

The Spanish prime minister planned to meet with representatives from his party, the PPP, along with the opposition Socialists with the hope that some kind of eviction reform can be agreed upon sometime this week.

Some Spanish lenders, however, have already agreed to suspend evictions temporarily. On Saturday, Spanish mortgage lender Kutxabank announced it would no longer be seeking evictions after Amaia Egana threw herself from her fourth-storey apartment to her death, rather than face eviction and living on the streets.

Update — The BBC is currently reporting Spain has suspended house evictions for two years for the most vulnerable people. The problem comes in, however when you wonder how do authorities classify who is considered the “most vulnerable”.