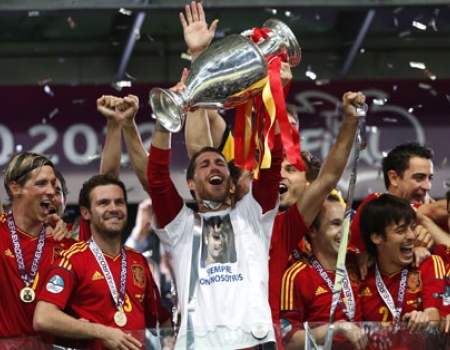 Of course, I’m a huge fan of the Spanish football team so, in last night’s Spain vs Italy Euro 2012 final game, I wanted Spain to win. But, jeez, didn’t you feel sorry for Italy? A team that had played consistently good football through the entire Euro 2012 tournament, lost their nerve when they came up against Spain and were thoroughly thrashed. The final score of the Euro 2012 final was 4-0, giving Spain it’s third consecutive tournament win.

You knew things were going to go badly for Italy when, less than 15 minutes into the first half and David Silva scored Spain’s first goal. That was followed up soon after with a second goal, this time from Jordi Alba. And the first half wasn’t even over.

By the time the second half began, it was obvious Italy were done. Straggling around the field not being able to keep up with Spain or the ball, they looked defeated and dejected, and then it got worse.

Italian Thiago Motta pulled a hamstring, was stretchered off and could no longer play. But, because the Italian coach, Cesare Prandelli, had already used his three substitutions, there was nobody else to replace him. For the rest of the game, Italy played as a team with one man short. Fernando Torres and Juan Mata then finished the thrashing of the Italian team with a goal each.

Spain is now the only team to ever win the Eufa tournament three consecutive times. They are, no doubt, the best football team in the world and their coach and manager, Vicente del Bosque, the world’s best coach.