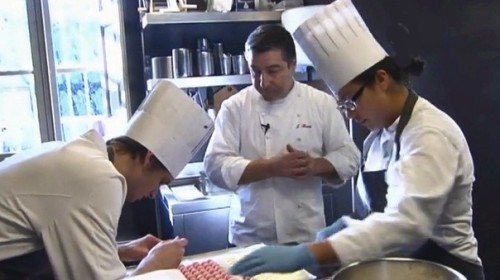 I love it when Spain gets some good news and today’s news is some of the best. Spain’s El Celler de Can Roca, located in Girona, has been named the World’s Best Restaurant beating out Denmark’s ‘Noma’, which has been in top place the last couple of years. El Celler de Can Roca is owned by the three Roca brothers from Catalonia, Jordi, Josep and Joan, and has long been known as one of the best restaurants in Spain. Now, it’s officially gone global.

The list that put El Celler de Can Roca into first place was put together by the British magazine, Restaurant. Every year they name 50 restaurants all over the world that they think should be known as the World’s Best, but the coveted place, of course, is always the top one.

In recent years, Denmark’s ‘Noma’  was in the number one position, with El Celler de Can Roca always coming in at number two. This year, however, the places were reversed with Noma being ‘demoted’.

Not too surprising really,  as 63 diners at Noma came down with intense food poisoning over a three-day period in February, causing severe vomiting and diarrhea. It was proven later that Noma wasn’t disinfecting their kitchens as well as they should have been so, when a staff member came to work with the novovirus, the virus spread quickly to many of the diners eating there.

Not only the diners were affected, however, as many believed that was the death knell for Noma’s chances of the top honors this year.

As for Spain’s El Celler de Can Rosa, however, they’re just going from strength to strength. Starting out on the list just eight years ago, they’ve slowly climbed towards the top. With brother Joan as head chef and Jordi as the pastry chef, this all-in-the-family business also includes Josep, who runs the restaurant absolutely superbly.

All three together have created something Spaniards should be proud of and a place where, you can guarantee, it will be difficult to get a reservation for the next few months now it’s officially on top of the world.

It’s not just the owners of El Celler de Can Roca that should be celebrating, however. Another Spanish restaurant, Mugaritz, from the city of San Sebastian, also made it into the top five. Yay, Spain!