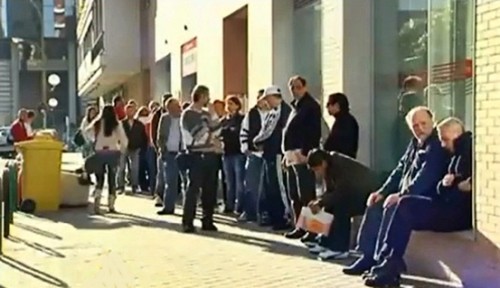 We seem to be banging the same drum here at Seriously Spain.

The drum that loudly proclaims “Austerity is not working” as more and more Spaniards become unemployed. The latest figures have just been released and Spain’s jobless rate rose to 27.2 percent in the first quarter of 2013.

Spain’s highest jobless rate ever, as an additional 237,400 Spaniards joined the unemployment lines.

As hundreds of thousands of immigrants once arriving in Spain for a ‘better life’ are now leaving to go back home or elsewhere, and Spaniards too are leaving Spain to work abroad, Mariano Rajoy continues his austerity measures.

As we’ve said before, and I’m sure we’ll say again before the Spanish economic crisis is over — it’s the definition of insanity. Continuing to do the same thing over and over again, and expecting a different result.

Spain’s jobless rate rising to 27.2 percent is proof one more time the insanity of austerity will keep producing the same result. More and more Spaniards barely able to survive.

Mariano Rajoy are you listening?